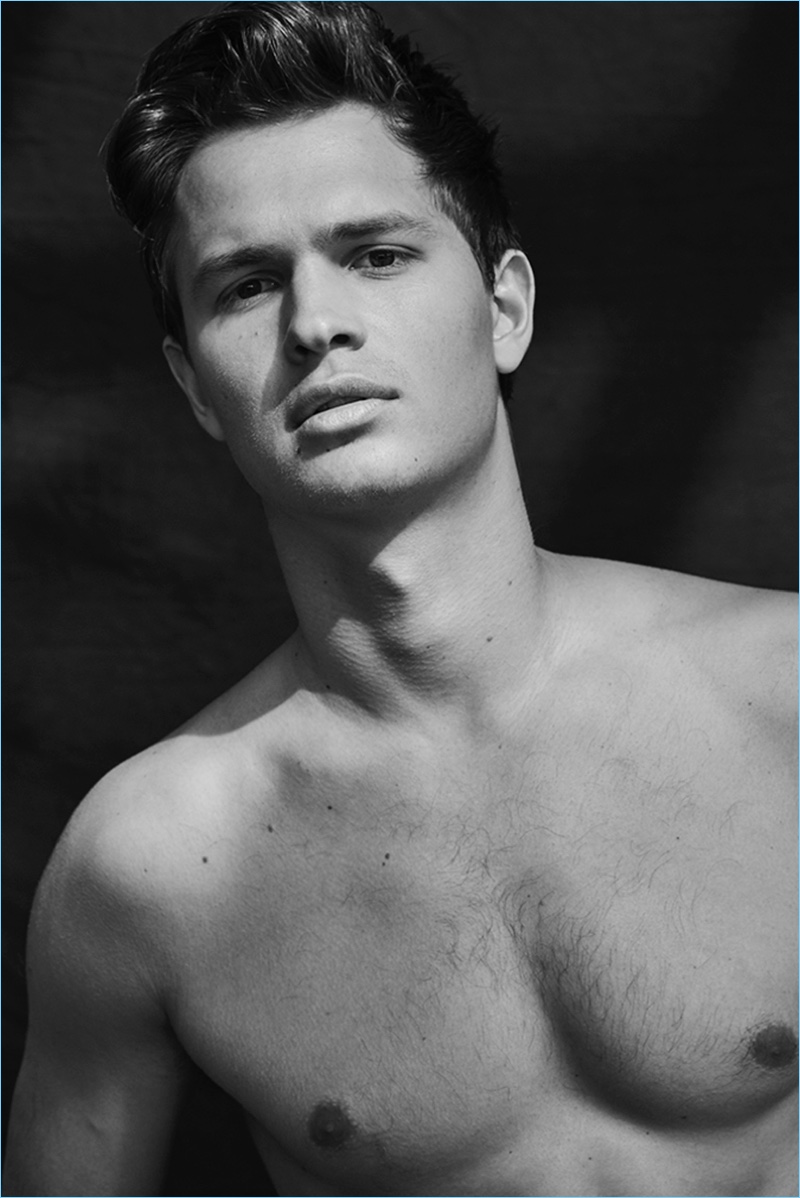 Ah, New York, back again in the big apple to visit my friend and former co-worker turned fashion photographer.  She had been begging me to come and see her for weeks so I finally took the time off work and switched one cold city for another.  I got there on a Wednesday as it was cheaper to fly on a weekday and planned on spending a couple days with her at work as she had some fun shoots lined up and said I really needed to be there and that her company wouldn’t mind at all if I tagged along.  I told her I would spring for coffee if the models got cold and she said “I think you’ll want to bring them more than coffee!”.  I had no idea what that meant other than she said they were young and super sexy.  That definitely helped make my decision to fly in to see her!

I checked into the hotel with a message from her at the front desk telling me her location for the shoot.  I dropped my stuff in my room and grabbed a quick snack and a change of clothes.  No one likes to go out in what they fly in.  I send for an Uber and I am out the door and on my way to some address in trendy SoHo.  This should be fun.

I get there and enter the building and I am greeted by a few people and they tell me where to go. I walked down a hall and into and open warehouse type area.  There’s lots of women and men flitting about with scarves and shirts flowing in the wake of their fast walking and accessories on their arms. Lights are flashing ahead while music is playing and I know where she’s at.  I don’t want to interrupt here so I watch from the side.  A sweet girl shows me where I can sit after she asked if I was her friend.  I thank her and say I’m good standing for now.  The model she was working with was a young woman and there were a couple of them as well as a few men lined up along the sides waiting their turn.  One in particular caught my eye.

He was very tall and lean.  His body looked celestial in the light as he took his place in front of the camera.  He slowly removed his shirt and stood in just jeans.  I had to adjust my stance as he did that.  His fingers carefully undoing the buttons with such precision that I couldn’t help but imagine them undressing me in the same manor.  His appearance was so wholesome and beautiful that it captivated me immediately.  I couldn’t stop looking at him.  His hair styled perfectly and the girl touching him up fluffed it a bit and he smiled at her.  I wanted to be her.  I wanted to run my fingers through it.  Grab it and tug it.  And that smile wasn’t just a smile.  It was a full on charming chic magnet kind of smile.  He knew it too.  Why wouldn’t he?  He was a model after all.  The way he stood was so stoic and mesmeric.  His movements subtle but seductive.  He was making love to that camera like a pro. So inviting, so pleasing and teasing all at the same time.  His look spoke for him like a hypnotic invitation.  I had know idea what the photo shoot was for but I didn’t care, I would buy whatever he was selling. It was all so glamorous in that moment watching him.  He’d been focusing on the camera and then my friend told him to look over her shoulder, to look away from it, focus on something behind her.  I was standing behind her and just like that, he saw me.  His eyes looked curious so they stayed on me.  I smiled shyly and he smiled back.  Oh boy.  The thoughts stirring in my  head were so unprofessional and extremely erotic.  I even bit my lip at one point to stop my mind from wandering along with my eyes.  He was so enticing.  From his bare feet just under his tattered jeans all the way up that entrancingly fine body of his.  He was the kind of handsome that made you take a deep breath when you saw him and I was about to hyperventilate from all the breaths I had been taking while we were eye pleasuring one another in a room of people.   Oh my.  What a riveting trip this may be?

She yelled that’s a wrap for lunch and finally turned around.  She shrieked with excitement when she saw me and hugged me and said “Now I know what he was looking at you sexy bitch”.  I laughed and gave her the loudest “PLEASE” and we stepped over to the table of food and she told me to eat as she grabbed a coffee and we walked to a table near these giant floor to ceiling windows.  A few other people joined us and she introduced me and then he walked over.  He was pulling on a white t-shirt as I stood to meet him.  She introduced us and he shook my hand.  He was so tall.  So tall.  His hand enveloped mine with the shake and I felt like I held on too long but he didn’t seem to mind.  His hand was so soft and manicured.  His entire body was so visually appealing.  His entire being was engaging, so attractive.  He even smelled attractive.  And when I said that he laughed and said “well, it is a photo shoot for cologne so, I put some on to get me in the mood”.  I giggled and said I was going to buy it just because of him and when I did  he leaned down, closer to me and said, “good and remember me when you spray it on yourself”.  I about choked on my water as I took a sip when he said that.  And there was that grin again and those lips so deliciously full and bitable.  I wanted to do bad things with him and for some reason, I think he would be fine with that.

We ate lunch, we chatted, I got caught up with my friend and she insisted I stay for the rest of the shoot and then go to a little party afterwards.  I said sure but that I’d love to change before hand and she said she had to go right from work to it so I could meet her there but that she felt bad so she offered him to go with me.  He graciously agreed.  She whispered “don’t thank me, just have fun!” and grabbed her camera and yelled back to work.

We walked to the street together talking nervously a bit and I called for a car.  I had to ask him how old he was and when he said 23 I about died.  He laughed and said age was only a number and said “I thought women your age were in their prime and men my age were too, so we match right?” and he winked.  I replied wide eyed and stunned “My age, my age….how old do you think I am?”  He walked closer and it forced me against the building as I took a few steps back and he whispered right in my face “I don’t care how old you are, you are fucking sexy and I noticed that right away”.  His lips, those lips, were right in front of mine.  I was breathing hard and his hand went on the other side of me against the bricks and just then the car honked and it was our ride.  He moved quickly to the car and opened the door and I got in with him following.  We were sitting so close to one another headed to my hotel room.  What the hell was I doing?  And just as the question rose in my thoughts he made a move.  His hand on my thigh and it was moving upwards as I looked at him.  His eyes were arresting.  His mouth open, his tongue moistening them as his hand was moving up and around to my back pulling towards him.  I let him.  I wasn’t going to deny myself this tantalizing opportunity.  Our lips met quickly and fiercely.  I was so drawn to him and to his fetching and fascinating good looks.  The kisses were hard but his lips were so soft and beckoned for more.  I wanted to give him more, so much more.

The car arrived at the hotel and we got out.  The cold city air hitting our energized bodies as we stepped out.  He took my hand and escorted me into the hotel.  Everyone was looking at him.  He had such a dynamic presence.  It wasn’t to be ignored.  Just his hand holding mine was potent enough to keep me sustained through the lobby to the elevators and to my room.  It felt like we were rushing teenagers to the basement to get away from the parents.  Stowing away to find some privacy to do those dirty under the sweater and over the zipper deeds that one would write about in their diary after they had to change their panties.  But today I was pretty sure the sweater was coming off and the zippers were staying down.

I flung the door open after I swiped the key over the lock and with the door he came at me with a rousing charge.  His body against mine and mine backed into the wall.  He picked me up and my legs wrapped around him as our lips searched each other.  I kissed his lips, his cheeks, his chin, his neck and back to his lips and he rounded around my neck after my lips pulling at my jacket and my t-shirt.  He wanted more skin to kiss more heat to feel and more of my body to take.  It was electrifying.  My hands all over that perfect hair.  He moaned as I pulled it.  He turned and sat himself with me on him onto the bed.  I ran my hands up the back of his shirt after he slid off his coat and he grabbed the white t-shirt with one hand and took it off.  He then removed my shirt as I tried to contain my “oh my God I don’t have a model’s body” thoughts and he leaned me backwards running his hand up me and over my chest and began to pepper my stomach with kisses and licks and bites.  I closed my eyes and let myself go.  I let my mind go and my body feel.  I felt him.  All of him.  Every single naked inch of him on those perfect white linens.  Our bodies betrothed in a fully possessed sweltering consummation of lust.  Captivated by one smoldering look behind the lens brought a tangible shuttering exhilarated absoluteness.  A full course meal of the flesh poised by vitality and vigor and sustained by experience and sophistication and appreciated by both.  Primordial passion or forbidden fun, either way, it was worth it.