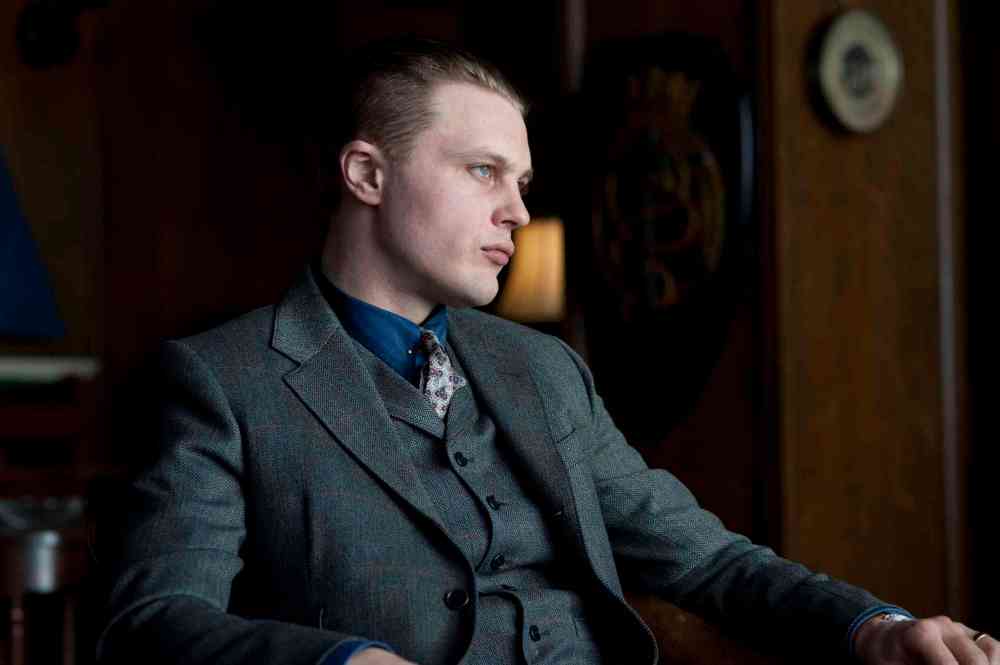 Look at him.  Staring off like that.  So poised and lost at the same time.  He looks away from me yet I know I am in there somewhere.  His thoughts are soaked with strategy and power.  Those boyish azure eyes look so cold right now. They are steel blue and direct and parched for something better to admire.  His hands so neatly placed on the arms of the chair.  I can almost feel them cupping my cheeks as those luscious scarlet lips touched mine.  His embrace still warm in my memory and his scent lingers in the breeze of my desire for him.

Our meetings have been brief but electric each time.  The term “there’s just something about him” rings true in my head over and over.  I am drawn to him.  The way he acts.  How he talks to me, so brash and nearly crude but honest and seductive.  Though I don’t think he’d have to try very hard.  He wouldn’t have to put up much of a show for me.  I’d go willing if he’d ask.  Most women would slap a man for kissing them in the park upon meeting them there but, why else did I meet him there?  I wasn’t meeting him to talk or to catch up on any business.  I met him because I was more than curious.  Those things he’s said to me warmed me up.  Heated my thoughts and my body.  So when he hugged me goodbye and then kissed me, I let him.

And now I see him sitting there in all his empiric glory and I want him.  Not just to kiss me gently but to devour me with those garnet healthy lips.  I want to taste him eagerly with out fear of what’s to happen next but only to feel and be in that moment until the next and the next.  I want to run my hands up his neck and into his hair feeling the strands between my fingers while his hands are on my back holding me against him as if he were holding onto me to survive.  Our bodies burning and the current between us is fully electrified.  Literally switched on with ravenous lust.  So alive with desire that a reinforced concrete wall could barely hold us up if he were to press me against it.  All the dread, death and defiance pouring out of him into me with such an impatient kiss that we cannot even contain the sounds from one another as the growls escape him and the whimpers escape me.  I am but prey to his hunting spirit and I have given up willingly.  Falling into the trap set by a glance and grin from him standing next to me.  Just a touch of his hand on my lower back to move past me set me ablaze. My stomach dropping and my eyes closing quickly to revel in the contact from him to me.

I breathe deeply at this fantasy I have enticed myself with.  All this from a silly kiss stolen by a man from a woman in a park.  But that’s simply all it takes when the wantonness is as strong as this.  How we manipulated it all and hid from it and then within and instant there was an impact.  It hit us both even if he is denying it by looking away.  Would he look away from me if I climbed up on his lap?  Handling him the way I imagine if I could get him alone.  Refusing to move until he picked me up and took me wherever he wanted.  Watching those sapphire eyes glaze over with hunger.  A hunger for me.  A manic need that would scratch it’s way out of him to get to me and take me.  Sending us both into the rapture of full on body frenzy.  Feverishly ravaging one another until we are ultimately barren of all that pent up need.  Destitute of desire for now and rewarded with fulfilled pleasure from our indulgence. Would he look at me then if he knew this is what I wanted from him?

Until then, if there is a then, I will adore him from over here.  I stand quietly admiring him from near the bar.  Music plays and people laugh and talk and glasses clink in cheering for prosperity and life’s good fortune but all I can do is look at him.  The cold bubbles of champagne dance on my tongue and I smile as I sip when he finally looks my way.  The heat of his eyes burn into mine and I can sense that he knows exactly what I am thinking and with that he stands and comes closer to me.  His eyes never leaving mine.  His lips part as he slips a cigarette in and lights it.  “Good evening doll, how are you?” he asks.  “Hungry” I reply and his eyes darken as he keeps them fixed on me after they have traveled the length of my body and lingered around my mouth.  His hand takes mine and he says “Well, let’s see what we can do about that shall we?”  and he leads me out of the room.  “Vindication comes in many forms doesn’t it?” he asks as he guides me down a lonely hall away from the party. It’s filled with pictures in golden frames nailed into paneled walls.  “I suppose it does” and as I barely finish the words he’s turned me to face him.  Here it is, the moment I was making up in my mind just minutes ago about to happen, am I ready?

He steadies himself and plants his feet right next to mine.  The warmth of his breath is on my neck as he’s leaned forward and dipped his head down.  I am nearly trembling with excitement. His body moves closer to mine, we are barely touching. I can feel the coolness of the wood against my back.  Those supple lips of his graze the skin of my neck and run the length of my ear and we are face to face.  I can’t stand this.  I am shaking and my body is on fire.  He blinks slowly inhaling deeply as if he were breathing me in.  I hold my breath and let my hands wrap around him giving him the okay to go for it.  His eyes nearly stone blue now with want my lips parted and licked I say with my words trembling “Kiss me” and he does.  I explode.  My body shatters in his hands.  He holds me up as I grab and pull and tug at him.  We are like animals.  Carnivorous for each other.  The deeper he kisses me the harder I give back.  It seems to go for hours but it’s only been minutes.  My lips feel swollen and bruised and my hands have searched his body repeatedly and his have mine. He stops.  I look up trying to catch my breath and he says “Still hungry?”  I giggle and say “Yes”.